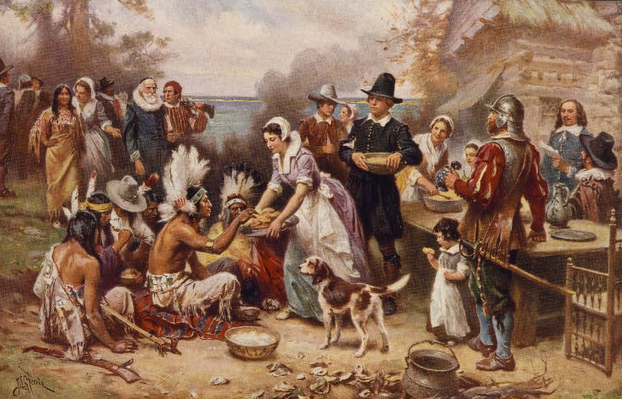 Celebrating Thanksgiving: Resources for Decoding the Neglected and Historically Misunderstood Holiday Between Halloween and Christmas

Did you know there is an ongoing debate on where the first Thanksgiving really took place? Educator Dale Harter shares details.

In my suburban Virginia neighborhood, the Halloween decorations have barely been taken down before the Christmas lights go up. Other than pumpkins, autumn-themed lawn flags, and some dried corn hanging on front doors, few people seem to celebrate Thanksgiving other than by consuming large amounts of delicious food on the “official” Thanksgiving Day. Not only does Thanksgiving seem to be a largely neglected holiday, but it might also be one of our nation’s most historically misunderstood holidays.

When you think about Thanksgiving, you most likely envision Pilgrims and Native Americans gathering for a harvest festival in the Massachusetts colony in 1622. If you are a proud Virginian with an interest in history, you might tend to think that your ancestors beat the Pilgrims to the punch with a religious ceremony in 1619 at Berkeley Hundred (more commonly known as Berkeley Plantation). Most people observe Thanksgiving each year on the fourth Thursday in November. A smaller number of people head to Berkeley on the first Sunday in November for the Virginia Thanksgiving Festival.

According to the Pilgrim version, the first Thanksgiving occurred in November 1621 when colonial Massachusetts Governor William Bradford organized a festival to celebrate their first successful corn harvest. Both Plymouth colonists and Native Americans from the Wampanoag tribe took part in this three-day festival. In the Virginia version, 35 men led by Captain John Woodlief of the Berkeley Company sailed up the James River aboard the Good Ship Margaret in 1619, landed at the Berkeley site on December 14, and held a prayer service of thanksgiving as directed by the company.

Although I could try to make a convincing argument as to which Thanksgiving tradition is the most authentic, I would rather not risk becoming involved in yet another historical/cultural controversy that seems so prevalent today. Instead, I will simply show you some resources you can use and consult when including Thanksgiving as part of your classroom plans.

If you want to cover all of your bases, here are a few recommendations from the eMediaVA library. There you will find a curated collection of 18 resources covering all things Thanksgiving. I especially like this video from American Experience on the alliance between the Pilgrims and the Massasoit tribe and the first Thanksgiving. Suppose you want to learn specifically about the first Thanksgiving in Virginia. In that case, eMediaVA also has a gallery of eight resources that focus on Berkeley, including videos on the plantation and the Indian Uprising of 1622. Although eMediaVA directs the Berkeley resources to grades 3-8, high school teachers should find them useful too.

In addition to eMediaVA, you will find a wealth of Thanksgiving materials at the Library of Congress. A keyword search for Thanksgiving on LOC’s main webpage will reveal more than 75,000 online photographs, documents, blogs, research guides, books, and sheet music. If you want something more manageable, check out LOC’s Classroom Materials where you can access a downloadable primary source set that includes a teacher’s guide.

If you want to learn more about the Thanksgiving tradition in Virginia, I recommend looking at the following resources. At the official Berkeley Plantation website, you will find a history of the 1619 event by H. Graham Woodlief, a descendant of Captain Woodlief. You also can listen to a recorded interview with the modern-day Woodlief at Virginia History Podcast. At the Virginia Thanksgiving Festival website, you can learn about the annual commemoration at Berkeley Plantation and perhaps make preliminary plans to attend next year’s event. Finally, you can learn more about the continuing historical controversy surrounding the first Thanksgiving in Virginia by reading this 2012 article, “Thankless,” from StyleWeekly magazine.

And, in case you are wondering, Thanksgiving is included in both the current and proposed, revised versions of the Virginia History & Social Sciences 2022 Standards of Learning.

Dale is a high school librarian in Chesterfield County and a returning eMediaVA Ambassador.