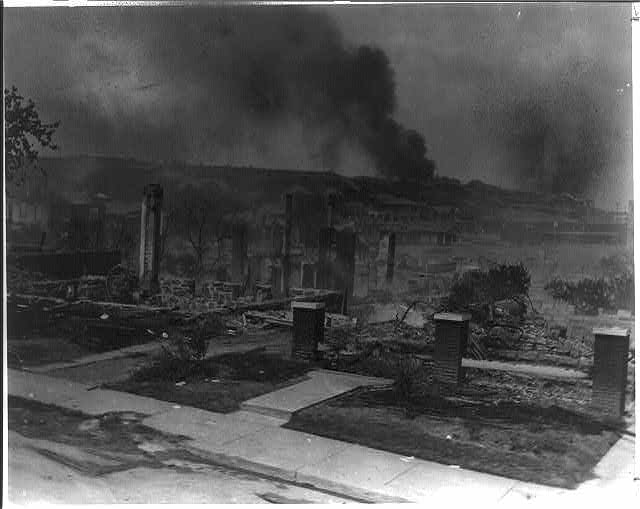 While in school, I don’t remember ever learning about the massacre in the Greenwood District. To give my teachers credit, I may have been talking, but I am pretty sure I would have remembered it. More likely, it was simply not included. Perhaps my teachers were unaware of its existence. According to New York Times author Ben Fenwick, “The massacre lay hidden for decades. Educators did not teach it. Government offices did not record it. Even archival copies of some newspaper accounts were selectively expunged.”

In May 1921, the Tulsa, Oklahoma, neighborhood of Greenwood, America’s Black Wall Street, was a fully realized antidote to the racial oppression of the time. A thriving community of commerce and family life to its roughly 10,000 residents, Greenwood was erased in less than 24 hours, sending unknown numbers to mass graves and displacing the survivors.

For decades, what happened in Greenwood was willfully buried in history. Using archival maps and photographs, The New York Times constructed a 3-D model of the Greenwood neighborhood as it was before the destruction. They also analyzed census data, city directories, newspaper articles, survivor tapes, and testimonies from that time to show the types of people who made up the neighborhood and contributed to its vibrancy. I suggest pairing the current event lesson plan Teaching About the Tulsa Race Massacre With The New York Times with the eMediaVA.org video, Tulsa: The Fire and the Forgotten which teaches the history of the Greenwood district from its founding during the post-Civil war era to May 31, 1921 – the day of the Tulsa Race Massacre. Students will explore a 3-D model of historical Greenwood — home of “Black Wall Street” — and then learn about how a white mob destroyed a prosperous Black community 100 years ago.

Anne Walker is a social studies teacher and eMediaVA Ambassador.